The Indian Pattern Carrier (also known by the acronym ACV-IP) was the only major armored fighting vehicle produced in India during World War II. Affectionally known as the 'Tatanagar' due to it being assembled by Tata Locomotives, it was designed as a multi-role vehicle whose primary roles were reconnaissance, observation, anti-aircraft, and armored personnel carrier. The lack of an automotive industry in India meant that components had to be imported, in this case the chassis of Canadian-built Ford/GMC 4 x 4 trucks which were subsequently modified in India with an armored hull. The layout of the ACV-IP had the engine compartment in the rear while at the front were seated the driver and commander in an open compartment which included a raised observation post as well as an opening for a Bren gun or a Boys anti-tank rifle; additional pintles were provided for extra armament if needed. The armored hull was noticeably angled which gave adequate protection against small arms fire (and even heavy machine gun fire at the front). The ACV-IP was initially operated by the 4th, 5th, and 6th Indian Divisions in North Africa and the Middle East, and were also used by Indian troops in Italy as well as Southeast Asia. Other Commowealth users included Australia and New Zealand, the latter which operated them during the Korean War.

Officially known as the Armoured Carrier, Wheeled, Indian Pattern or ACV-IP, the initial Mk I model was based on a Ford truck chassis but was quickly followed by the Mk II with a revised chassis with all-wheel drive and rear motor. Sub-variants included Mk IIA with a modified hull, Mk IIB with thicker armor, and Mk IIC with a new chassis, armored roof and small turret. The Mk III was similar but with further hull modifications while the Mk IV with an open hull. 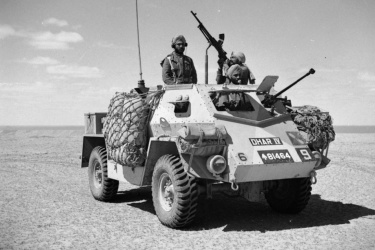