The Steyr 4K 7FA is an updated version of the earlier Saurer 4K 4FA tracked APC (Saurer being taken over by Steyr-Daimler-Puch in 1970) that also incorporates elements from the company's earlier SK 105 light tank. Like its predecessor, the Steyr features an all-welded hull that protects against up to 20-mm AP rounds. Armament consists of a 12.7-mm M2 Browning machine gun which is mounted on the front of the gunner's cupola. It can carry the same amount of infantrymen (eight) with similar hatches on the sides of the roof and the possibility of mounting machine guns on the sides of the hatch. A key difference with its predecessor is the use of a more powerful Steyr 7FA 320 hp diesel engine, as well as nearly double the fuel load which greatly increases its range; the more powerful engine also boosts speed slightly. Amphibious capability is not provided, however, an NBC system is installed along with various fire suppression systems. The Steyr 4K 7FA began serving with Austrian Army units in the 1970s and was also exported to a number of countries including Bolivia, Cyprus, Nigeria, and Greece, the latter which further developed it as part of the Leonidas APC family which is described separately.

The first prototype of the 4K 7FA G 127 was produced in 1976 with production commencing the following year. An IFV version is known as the 4K 7FA-KSPz which can carry two additional infantrymen and has more provisions for firing weapons from the rear hatches. Other versions include the 4K 7FA-Fü command vehicle, 4K 7FA-San armored ambulance, and 4K 7FA AMC 81. Numerous other variants have been proposed for export. Greek versions are known as the Leonidas-1. 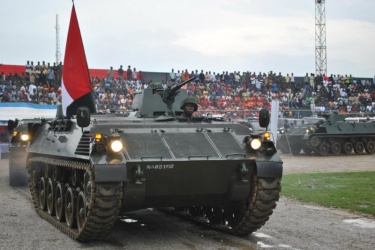