The Saurer 4K 4FA was a tracked APC that, along with its successor the Steyr 4K 7FA, became the main infantry transport for the Austrian Army during the Cold War and afterward. The Saurer's hall is of all-welded construction and features relatively strong protection for a vehicle of its type, which is aided by a prominently sloped glacis plate. This affords protection for up to 20-mm AP rounds in the frontal arc. The driver sits at the front of the vehicle, behind which is a gunner that mans a roof-mounted 12.7-mm M2 machine gun which is protected by an armored shield. Some vehicles, however, were equipped with an Oerlikon designed turret that mounts a 20-mm Type 204 GK cannon. The troop compartment is located in the rear and can carry up to eight infantrymen, with twho long hatches in the roof and twin doors with observation ports at the rear. The Saurer is not amphibious, nor does it come equipped with NBC capability although this can be added optionally along with another range of provisions such as infra-red driving. A number of additional vehicles were derived from the basic APC model and it was later upgraded into the Steyr 4K 7FA APC. The hull was also the basis for the SK 105 light tank. Despite generally good performance, it only saw service with the Austrian Army.

Initial prototypes were built by Saurer as early as 1958 with the 3K 3H and later the 4K 3H in 1959 with weaker engines. These were later upgraded in the 4K 2P. The first production variant was the 4K 4F which was powered by a 200-hp diesel, switching to the more powerful 6FA engine in th e3K 3KA and 4K 4FA. The 20-mm cannon armed version is known as the 4K 4FA-G. Other non-APC variants include the 4K 4FA-San armored ambulance with capacity for two stretchers and four sitting patients, the 4K 3FA-FU command vehicle and 4K 3FA-FU/A artillery command vehicle, and 4K 3FA-FU/IA anti-air command vehicle. The 4K 3FA-F2S was a radio vehicle while the 4K 3FA-FS a wireless teleprinter vehicle. Finally, the 4K 4F GrW1 was an 81-mm mortar carrier. 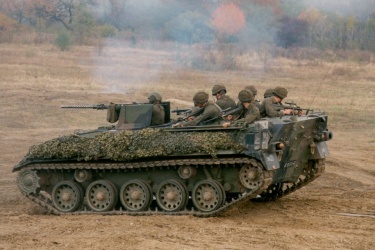