The French Navy had traditionally been second in Europe to that of Britain's, by in the later half of the 19th Century fell behind that of the its main naval rivals. A naval race against its Mediterranean enemy, Italy, fell short after the 1940 surrender but France was quick to rebuild its fleet during the Cold War, and is one of the few to retain global capability to this day.

France was slow to join the dreadnought race at the beginning of the 20th century: by the start of World War I, there were only four such ships in the French arsenal compared to the dozens in service with the British and German navies. Size, France's sizeable pre-dreadnought fleet was vital in supporting the Allied effort, particularly in the Mediterranean where it saw extensive action during the Gallipoli campaign. Facing some of the same post-war financial difficulties as other European nations, France was relegated to second-tier naval power status during the Washington Naval Treaty, but a hostile fascist government in neighboring Italy became a trigger for a naval arms race during the 1930s.

France entered World War II with a larger and more capable fleet that that of either of its European Axis enemies but concentrated its power in the Mediterranean leaving the Atlantic to the British. Unfortunately, the swift defeat of the French army in the summer of 1940 left its large fleet (now holed up in French Mediterranean and North African ports) potentially in the hands of the enemy. A British ultimatum to hand over its ships went unheeded and the Royal Navy attacked the Algerian port of Mers-el-Kébir, sinking numerous ships. Later, fearing a German takeover in late 1942, the French scuttled much of its fleet at its homeport in Toulon. Despite these losses, numerous French ships managed to sail away over the course of the war and fight alongside the Allies and enough larger vessels survived the war to form the core of a new post-war navy after 1945.

The French had the experience and technology to build up its fleet gradually during the Cold War, and thanks to the transfer of a number of US and British light carriers (plus its own pre-WW2 carrier, the Béarn) built up its capabilities in naval aviation. It was also the only NATO nation besides the US to develop an indigenous submarine nuclear deterrent, thereby avoiding the political strings attached to using the US Trident system (which the British adopted). French carriers forces have seen extensive action over the past decades, including over the numerous US- or NATO-led wars in the Middle East and the former Yugoslavia. Today France is the only nation aside from the US to possess a nuclear-powered aircraft carrier and it has also been a pioneer in stealth design for ships.

There are currently 76 entries, data on 12 warship types, and 465 individual warships in the registry. 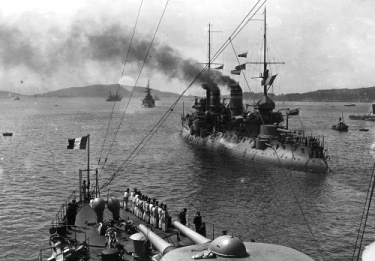 The French fleet of World War I was large but still reliant on pre-dreadnoughts. 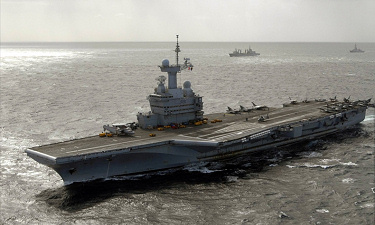 The nuclear-powered Charles de Gaulle is the only ship of its kind outside the US.