The Terrex ICV (Infantry Carrier Vehicle) is a modular armored fighting vehicle that was developed as a private venture by ST Kinetics. Its primary roles are as an armored personnel carrier or infantry fighting vehicle with different armament configurations each while sharing the same hull. The Terrex features an 8 x 8 configuration and is made of all-welded steel with the ability of carrying additional appliqué armor available if needed. The supension is a patented double wishbone type for improved cross-country performance. The driver sits at the front left with the engine to the right, the fighting compartment in the middle and a troop compartment at the rear which is accessed through a rear ramp. As an APC, it can carry up to 12 fully equipped troops, this lowered to 8 in IFV variants. The APC version features a one-man turret which is armed with CIS-produced 40-mm automatic grenade launcher and a 7.62-mm coaxial machine gun. Armament for IFV versions varies depending on client requirements but can include a 25/30-mm autocannon, SPIKE ATGMs, or even a 105-mm gun. NBC protection is provided as is amphibious capability as well thanks to two water jets mounted under the rear hull. It is also air transportable in a C-130 aircraft. The Terrex is currently in service with the Singapore Armored Forces as well as with Ghana and Turkey where it is locally produced by Otokar.

The Terrex AV81 prototypes were designed as a private venture and first displayed in public in 2001. It entered service as the Terrex ICV. Non-APC/IFV variants include a command vehicle, armored ambulance, and reconnaissance, surveillance, and target acquisition (RSTA). A Turkish version built locally by Otokar is known as the Terrex AV82. 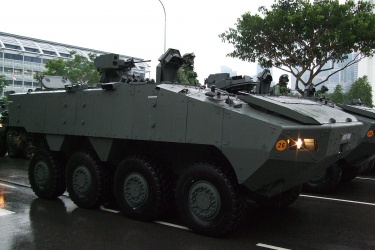