The TAM (Tanque Argentinio Mediano) was an attempt to modernize the Argentinian Army for the 1980s given the large stock of ageing World War II and immediate post-war tanks which were still in service. Partnership with a European company, in this case Germany's Henschel, would also be necessary given the reluctance of the US to be involved. The resulting vehicle, built in Argentina with considerable domestic technical input (but many German components), was a medium tank based on the hull of the Marder IFV with a strengthened chassis. Despite this, the tank is relatively light by modern standards, a deliberate design decision to accomodate Argentina's existing roads, bridges, and terrain. Armor protection is relatively light by modern MBT standards but this was deemed a necessary tradeoff against improved mobility. Armament consisted initially in the British L7A2 105-mm gun, but this was later replaced by a locally-built version of the Rheinmetall Rh-105-30. Secondary armament includes two 7.62-mm machine guns. The engine is an MTU diesel which gives it excellent speed and range; however, the TAM is not amphibious nor does it have NBC capability. Numerous variants of the tank have been built including the VCTP IFV which is described separately, as well as the VCA 155 self-propelled gun. The TAM barely missed out on the Fallkands War and has only been used in peacekeeping operations in Yugoslavia. Despite some foreign interest, it has not been exported.

The first prototype was built by Henschel in Germany in 1976, with production TAM vehicles built in Argentina by TAMSE. Variants include the VCA 155 155-mm self-propelled gun, the VCRT armored recovery vehicle, and the VCLC multiple rocket launcher. The VCTP is an IFV version that is described separately along with further variants. 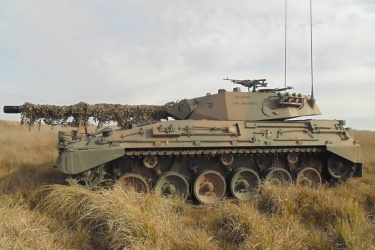