The LT vz. 35 (or LT-35) was one of the two Czech tank designs that was eventually adopted by the German Army following its invasion and annexation of Czechoslovakia in 1939 (when it was renamed PzKpfw 35(t)). Developed in the mid-1930s, it was the main tank used by the Czech Army before the annexation and was considered a rather advanced design for its day on account of its 37-mm ÚV vz. 34 gun (renamed KwK 34(t) in German service) built by Skoda which at the time of its introduction in 1934 was among the most effective tank guns anywhere. Additionally, the PzKpfw 35(t) had armor protection that reached 35mm maximum. This was provided through a combination of riveted and bolted armor plate. Suspension was provided by four bogies (each with a pair of small road wheels) sprung by a leaf spring. Unfortunately, the LT vz. 35 suffered from constant mechanical breakdowns due to its complexity, notably due to the use of a pneumatic transmission, and this was only corrected later during its service life with the German Army (a loader position was also added by the removal of various rounds of ammunition). In Czech service, the LT vz. 35 was used for defending the country's borders and nearly half the production run ended in German hands. With the Wehrmacht, the PzKpfw 35(t) saw action during the early blitzkrieg campaigns and after Barbarossa, by which time it was clearly obsolete. Other users included Bulgaria, Hungary, Romania and Slovakia. Both Bulgaria and Romania had ordered these tanks before the annexation while local production was undertaken in Hungary.

The prototype S-IIa during the summer of 1935 to compete against a rival design from CKD. Deliveries began in December 1936 and entered Czech Army service as the Lehký tank vzor 35 or LT vz. 35. In German service it was known as the Panzer 38(t) (SdKfz 140). There were no variants although improvements to the engine and steering system were undertaken by the Germans. The LT vz. 35 was built locally by Hungary as the 40M Turan I and featured a 40mm gun. 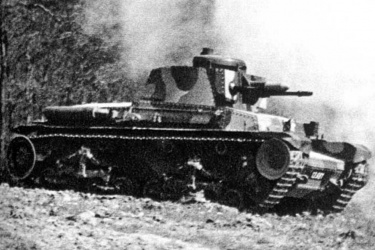