The K9 Thunder is South Korea's first indigenously-designed self-propelled gun having previously relied on a locally-produced version of the US M109, known as the K55. The K9 was designed to significantly improve the capabilities of South Korea's SPG force, being outnumbered and outranged by North Korean artillery. Unlike the aluminum-hulled M109, the K9 features an all-welded steel hull and turret which can withstand enemy fire of up to 14.5-mm. A key feature of its design is ease of maintenance and as as result, it features numerous tried and tested components including a German-designed MTU MT 881 engine (the same used on the PzH 2000) as well as an Allison X1100-5A3 transmission (the same used on the M1). Main armament consists of a Hyundai WIA CN98 155-mm 52-caliber howitzer which can fire rocket-assisted projectiles at a distance of up to 40 km. It can fire three rounds in 15 seconds in burst mode and a sustained rate of 2-3 rounds per minute for one hour. It can be readied to fire in just 30 seconds if it is in stationary mode or 60 seconds while in movement, giving it considerable shoot-and-scoot capability. The K9 has seen considerable export interest, with customers including Finland, India, and Norway, and contrats signed with Australia and Estonia. Additonally, there is also license production in Poland (chassis only) and Turkey. The K9 was involved in an artillery exchange with North Korea over Yeonpyeong Island in 2010 with six vehicles involved in the encounter.

Development began in the late 1980s with the prototype XK9 completed in 1994. It entered service as the K9 Thunder in 1999. An improved variant is known as the K9A1 which features additional electronics and fire control, as well as the ability to fire extended range ammuntion. A planned K9A2 version will also add an auto-loader and increased firing rate. A locally-developed Turkish version with a modified turret and chassis is known as the T-155 Fırtına while a similar Polish version is known as the AHS Krab which uses the K9 chassis and the UK-designed AS-90 turret. 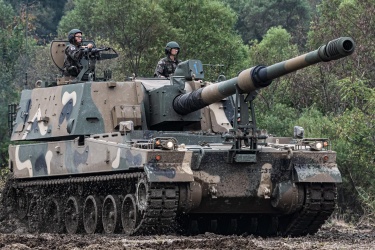