The K200 KIFV (Korea Infantry Fighting Vehicle) was South Korea's first domestically designed IFV, being built in considerable numbers since the mid-1980s. The K200 is a compact design with an all-welded aluminum hull that provides protection for rounds of up to 12.7-mm across the frontal arc and sides. The layout is conventional, with the driver at the front left and a German-designed (but built under license by Daewoo) MAN diesel engine. By IFV standards, armament is quite light, being usually a 12.7-mm M2 machine gun mounted on a cupola located behind the engine. Despite being turret-less, protection for the gunner is afforded by means of a shield that has all-around coverage. A second gunner's position is located behind the main gun, and in some vehicles the main gun is replaced by a 40-mm automatic grenade launcher. The troop compartment is located at the rear and can carry up to nine infantrymen. These enter and exit through a rear ramp. Firing ports are located besides the roof hatch, as well as on the ramp. The K200 is amphibious and also offers optional NBC capability. Numerous non-IFV variants also exist. The main customer of the K200 has been the RoKA where it has replaced US-supplied M113s, and it has also been exported to Malaysia. Hundreds of vehicles remain in service with the RoKA although it is gradually being supersed by the K21.

Design of the K200 KIFV began in 1981 with the first production models built four years later. An improved version was designed in the 1990s and is known as the K200A1 with a more powerful engine and a new automatic transmission. Non-IFV versions include the K216A1 NBC reconnaissance vehicle, K242A1 107-mm mortar carrier, K263A1 SPAAG armed with a 20-mm M168 Vulcan cannon, K277A1 command post vehicle, K281A1 81-mm mortar carrier, K288A1 recovery vehicle, and the K200A1 armored ambulance. A number of turreted versions with guns of 30-mm or 90-mm have also been built as prototypes for export. 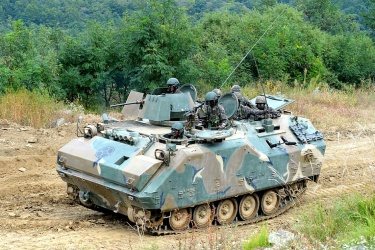