Despite the K1 tank giving the Republic of Korea Army a considerable technological advantage over its North Korean adversary, a new and more powerful tank was seen as necessary to keep the RoKA with a competitive edge in the 21st Century. The result is the K2 Black Panther, designed by the Korean Agency for Defense Development and built by Hyundai Rotem. Unlike the K1, which was based around the US M1, the K2 is truer indigenous design though it does incorporate numerous foreign (mostly German) components, notably a gun based on the Rheinmetal 120-mm L55 which equips the Leopard2A6, and an MTU engine that was eventually replaced by a domestic Doosan DST model. The gun is equipped with an autoloader which reduces the crew size to 3, and is supported by a fire-control system linked to an EHF radar and a laser rangefinder. The gun is stabilized and optimized for use in Korea's rugged terrain, while an advanced suspension system allows control of each individual bogie allowing the tank to adjust to various positions including leaning on one side. Primary armament is based around an indigenous APFSDS round but it can also fire the Korean Smart Top-Attack Munition (KSTAM) which is fired as a mortar and effective against numerous types of targets. Protection has been improved compared to the K1 and features explosive reactive armor (ERA) as well as both hard-kill and soft-kill systems, the former known as the Korean Active Protection System (KAPS). The K2 is also fully amphibious and NBC capable. Teething troubles delayed introduction of the K1 until 2014, with many of the first units using German components before reliable domestic components became available. Because of its high price tag, it is likely to complement rather than replace the K1. However, it has achieved some export success with Turkey being its initial customer, followed by Poland and possibly Peru.

Following the experimental pre-production XK2 units, the first batch of K2 tanks entered service in mid-2014. These were followed by a second batch which addresses some issues with the engine and transmission. License-produced Polish versions will be known as the K2PL. 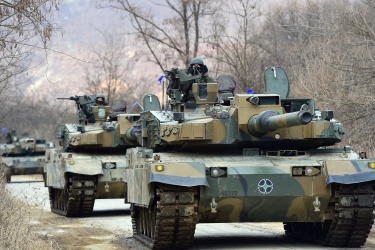