The FUG (Felderito Úszó Gépkocsi) is an amphibious reconnaissance vehicle that was designed in Hungary as an alternative to the Soviet-built BRDM series, most notably the BRDM-2 which it strongly resembles. The FUG is a 4 x 4 vehicle built with an all-welded hull with the driver and commander seated at the front, engine compartment in the rear, and the crew compartment in the middle. Standard defensive armament is a 7.62-mm SGMB machine gun, and the gunner can be protected by the roof hatches which can be fixed vertically. Aside from that, the FUG features two firing ports on each side and two in the rear. Like the BRDM-2, the FUG features two belly wheels in the middle of the chassis which are designed to improve cross-country mobility. It is also fully amphibious, propelled with two water jets in under the real of the hull plus a trim vane erected before entering the water to provide buoyancy. No NBC protection is provided, however. The success of the FUG resulted in it being developed into an armored personnel carrier known as the PSZH (Páncélos Szálltó Harcjármü). It features a more powerful engine as well as a turret similar to that of the BRDM-2, with a 14.5-mm KPVT heavy machine gun and a coaxial 7.62-mm PKT. Additionally, it has two side doors for entry and exit into the troop compartment. Its small size compared to other comparable APCs like the BTR-60 and OF-64, however, resulted in a troop transport capacity of just six. The FUG entered service with Czechoslovakia, East Germany, and Poland, as well as some vehicles exported to Iraq. A small number remain in Hungarian inventories although they are unlikely to be serviceable.

The FUG (also known by its local designation D-442) was designed in the early 1960s with components sourced from different designers under coordination by the Hungarian People's Army. The standard scout car version changed little throughout its production, with other variants being the D-442.01 PK-FUG command vehicle, D-442.03 VS-FUG NBC reconnaissance vehicle, D-442.01 MRP-FUG forward air controller post, and D-442.02 MU-FUG engineer reconnaissance vehicle. APC versions were known as the PSZH (local designation D-944). A modernized version was the D-944.00M PSZH-M new engine and armament. Command vehicle variants as well as an APC version for internal security duties were built. Czechoslovakian versions were known as the OF-65 and East German versions were known as the SPW-PSH, with a myriad of domestic variants also developed. 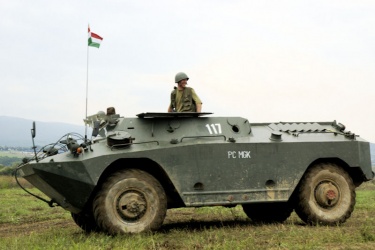