The Bandkanon 1 (Bkan 1) was Sweden's main indigenously-built self-propelled gun of the Cold War. The Bkan 1 was based on the chassis of the contemporary S-tank, borrowing the engine, transmission, and suspension; notably the hull was lengthened and it featured an additional road wheel. In contrast to the turret-less S-tank, the Bkan 1 featured a turret-like superstructure that was divided into two halves, the left which housed the commander, gunlayer, and radio operator while the right half had the loader and machine gunner, the latter which operated a 7.62-mm machine gun. The main armament was mounted in the middle of the superstructure, and consisted of a 155-mm 50-caliber gun. By far the most impressive feature of the gun was its rate of fire, which was as high as 14 rounds in 48 seconds, much higher than any other 155-mm gun. The gun's overhang in the rear featured the magazine compartment which was armor-protected and featured two doors on the top from which a new clip of ammunition was fed via a built-in hoist. This allowed a full loading time of just two minutes. The Bkan 1 could fire a standard round up to 25.6 km. Despite the Bkan 1's impressive performance, budget cuts resulted in only a handful of vehicles built and no export orders. They were primarily deployed in northern Sweden until 2003.

The Bkan 1 began development in the late 1950s. A modernization program in the 1980 resulted in an upgraded power pack to that used on the Strv 103B model of the S-tank as well as additional fire-control and navigation system upgrades, upgraded vehicles were known as the Bkan 1C with the original version retroactively designated Bkan 1A. 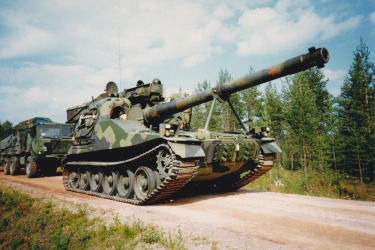